The Killer is Not Alone 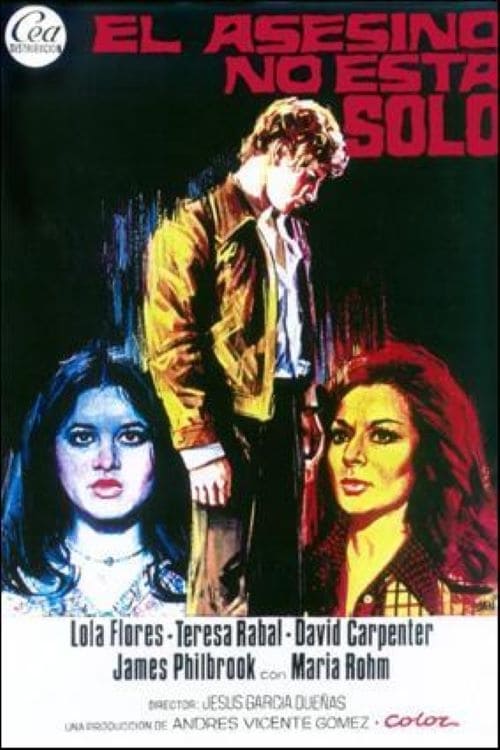 The Killer is Not Alone

Julio, an only child belonging to a wealthy family, murders a prostitute who tries to seduce him. He, in childhood, suffered severe trauma and this causes serious problems with women. Because of this, runs away and stays in a boarding house in Madrid, where he meets Monica, the daughter of the owner, who maintains relationships that seek to build on for help in their desperate situation. As his obsession for killing is increasing.

A reporter and a blind retired journalist try to solve a series of murders. The crimes are connected to experiments by a pharmaceutical company in secret research. The two end up becoming targets of the killer.

The Strangers: Prey at Night

A family’s road trip takes a dangerous turn when they arrive at a secluded mobile home park to stay with some relatives and find it mysteriously deserted. Under the cover of darkness, three masked psychopaths pay them a visit to test the family’s every limit as they struggle to survive.

Twenty years ago in the sleepy mining town of Valentine Bluffs, a fatal mining disaster occurred on Valentine's Day while some of the crew was decorating for a party. The sole survivor of the accident killed the remaining crewmembers and warned the town not to celebrate Valentine's Day again. When a group of teenagers decides to defy that order, a murderous maniac in mining gear begins dispatching townsfolk in bloody and creative ways.

On Halloween night at a horror theme park, a costumed killer begins slaying innocent patrons who believe that it's all part of the festivities.

A deeply disturbed photographer and Vietnam veteran, named Kirk Smith, terrorizes Los Angeles by going around strangling lingerie-clad young women in their homes while taunting Lindsay Gale, a young psychologist, by calling her on a radio call-in show to describe his sexual hang-ups and misogynistic ways, while a local police detective, Lt. McCable, is always two steps behind in trying to catch the psycho.

Fifteen years after murdering his sister on Halloween Night 1963, Michael Myers escapes from a mental hospital and returns to the small town of Haddonfield, Illinois to kill again.

An elderly and retired police detective and a young amateur sleuth team up to find a serial killer whom has resumed a killing spree in Turin, Italy after a 17-year hiatus.

Eight unsuspecting high school seniors at a posh boarding school, who delight themselves on playing games of lies, come face-to-face with terror and learn that nobody believes a liar - even when they're telling the truth.

The Texas Chainsaw Massacre: The Beginning

Chrissie and her friends set out on a road trip for a final fling before one is shipped off to Vietnam. Along the way, bikers harass the foursome and cause an accident that throws Chrissie from the vehicle. The lawman who arrives on the scene kills one of the bikers and brings Chrissie's friends to the Hewitt homestead, where young Leatherface is learning the tools of terror.

I Am Not a Serial Killer

Fifteen-year old John Cleaver is dangerous, and he knows it. He’s obsessed with serial killers, but really doesn’t want to become one. Terrible impulses constantly tempt him, so for his own sake, and the safety of those around, he lives by rigid rules to keep himself “good” and “normal”. However, when a real monster shows up in his town he has to let his dark side out in order to stop it – but without his rules to keep him in check, he might be more dangerous than the monster he’s trying to kill.

The sequel to House of 1000 Corpses – the Firefly family are ambushed at their isolated home by Sheriff Wydell and a squad of armed men guns blazing – yet only Otis and his sister, Baby, manage to escape the barrage of bullets unharmed. Hiding out in a backwater motel, the wanted siblings wait to rendezvous with their errant father, Captain Spaulding, killing whoever happens to stand in their way.

"Stepfather" Jerry Blake escapes an insane asylum and winds up in another town, this time impersonating a marriage counselor. With a future wife and new stepson who love him, Blake eliminates anyone who stands in his way to building the perfect family.

A gang of ruthless highway killers kidnap a wealthy couple traveling cross country only to shockingly discover that things are not what they seem.

In 1974, Terry commits a murder and pins it on his twin brother, Todd. Ten years later, Todd escapes from a mental institution on the same day as Terry’s murderous instincts resurface.

Kelly, a young woman, has been plagued by nightmares of a burning man her entire life. Upon entering college, she pledges a sorority that forces them to perform an initiation night prank. With several of her friends, she breaks into a store and unfortunately discovers that it is impossible to exit from the building after it is entered illegally. Trapped in a new nightmare, Kelly must fight for survival.

After being sent to the electric chair, a serial killer uses electricity to come back from the dead and carry out his vengeance on the football player who turned him in to the police.

Sue Ann is a loner who keeps to herself in her quiet Ohio town. One day, she is asked by Maggie, a new teenager in town, to buy some booze for her and her friends, and Sue Ann sees the chance to make some unsuspecting, if younger, friends of her own.

Desperate to repay his debt to his ex-wife, an ex-con plots a heist at his new employer's country home, unaware that a second criminal has also targeted the property, and rigged it with a series of deadly traps.

Camp counselors are stalked and murdered by an unknown assailant while trying to reopen a summer camp that was the site of a child's drowning.