The Gallery of Monsters 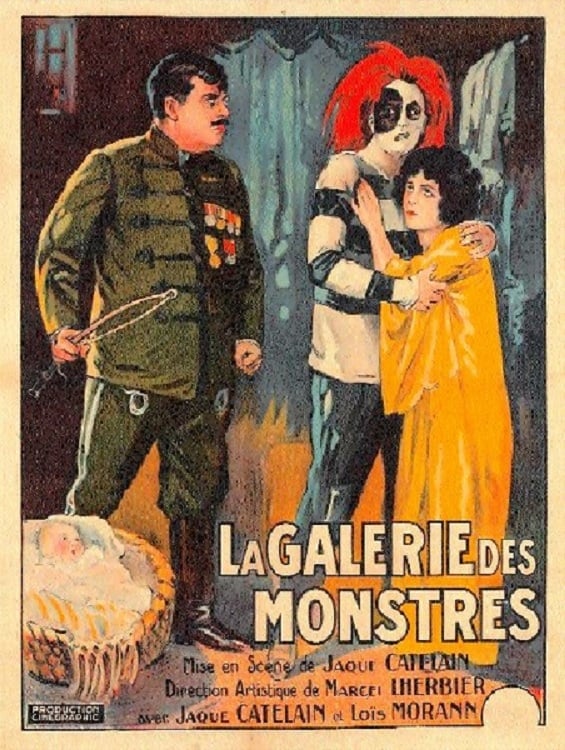 The Gallery of Monsters

Married carnival performers are subjected to the abuses of their employer in this silent film gem that has not received as much attention as it deserves. When the boss' unwanted advances on the wife are refused, he taunts a lion until it nearly kills her. But the other performers assist in a unique plot for revenge. Jaque Catelain directs and stars in this film made for influential French director Marcel L'Herbier's production company. Some sources also list L'Herbier as co-director, as he is credited here. The film boasts some rapid-fire editing techniques that were decades ahead of its time.

It's a Wonderful Life

A holiday favourite for generations... George Bailey has spent his entire life giving to the people of Bedford Falls. All that prevents rich skinflint Mr. Potter from taking over the entire town is George's modest building and loan company. But on Christmas Eve the business's $8,000 is lost and George's troubles begin.

Hollywood, 1927: As silent movie star George Valentin wonders if the arrival of talking pictures will cause him to fade into oblivion, he sparks with Peppy Miller, a young dancer set for a big break.

The Phantom of the Opera

Deformed since birth, a bitter man known only as the Phantom lives in the sewers underneath the Paris Opera House. He falls in love with the obscure chorus singer Christine, and privately tutors her while terrorizing the rest of the opera house and demanding Christine be given lead roles. Things get worse when Christine meets back up with her childhood acquaintance Raoul and the two fall in love

Inhabitants of a small village in Hungary deal with the effects of the fall of Communism. The town's source of revenue, a factory, has closed, and the locals, who include a doctor and three couples, await a cash payment offered in the wake of the shuttering. Irimias, a villager thought to be dead, returns and, unbeknownst to the locals, is a police informant. In a scheme, he persuades the villagers to form a commune with him.

The story of American showman P.T. Barnum, founder of the circus that became the famous traveling Ringling Bros. and Barnum & Bailey Circus.

Throughout his life Edward Bloom has always been a man of big appetites, enormous passions and tall tales. In his later years, he remains a huge mystery to his son, William. Now, to get to know the real man, Will begins piecing together a true picture of his father from flashbacks of his amazing adventures.

In a seemingly perfect community, without war, pain, suffering, differences or choice, a young boy is chosen to learn from an elderly man about the true pain and pleasure of the "real" world.

The Cabinet of Dr. Caligari

Francis, a young man, recalls in his memory the horrible experiences he and his fiancée Jane recently went through. Francis and his friend Alan visit The Cabinet of Dr. Caligari, an exhibit where the mysterious doctor shows the somnambulist Cesare, and awakens him for some moments from his death-like sleep.

Agent Coulson informs Agent Sitwell that the World Security Council wishes Emil Blonsky to be released from prison to join the Avengers Initiative. As Nick Fury doesn't want to release Blonsky, the two agents decide to send a patsy to sabotage the meeting...

How to Train Your Dragon: Homecoming

It's been ten years since the dragons moved to the Hidden World, and even though Toothless doesn't live in New Berk anymore, Hiccup continues the holiday traditions he once shared with his best friend. But the Vikings of New Berk were beginning to forget about their friendship with dragons. Hiccup, Astrid, and Gobber know just what to do to keep the dragons in the villagers' hearts. And across the sea, the dragons have a plan of their own...

The Day the Earth Stood Still

An alien and a robot land on Earth after World War II and tell mankind to be peaceful or face destruction.

James Bond is sent to investigate after a fellow “00” agent is found dead with a priceless Fabergé egg. Bond follows the mystery and uncovers a smuggling scandal and a Russian General who wants to provoke a new World War.

A young elephant, whose oversized ears enable him to fly, helps save a struggling circus, but when the circus plans a new venture, Dumbo and his friends discover dark secrets beneath its shiny veneer.

Dumbo is a baby elephant born with over-sized ears and a supreme lack of confidence. But thanks to his even more diminutive buddy Timothy the Mouse, the pint-sized pachyderm learns to surmount all obstacles.

Olaf is on a mission to harness the best holiday traditions for Anna, Elsa, and Kristoff.

Set in the 1970s, the short follows young adult Jess as she joins her friends at a party in a dilapidated mansion hosted by the mysterious Seth. When odd things begin to happen to Jess and her friends, the Phantom Stranger intervenes to save her from a dreary fate.

Animal pals Alex, Marty, Melman, and Gloria are still trying to make it back to New York's Central Park Zoo. They are forced to take a detour to Europe to find the penguins and chimps who broke the bank at a Monte Carlo casino. When French animal-control officer Capitaine Chantel DuBois picks up their scent, Alex and company are forced to hide out in a traveling circus.

The Spy Who Dumped Me

Audrey and Morgan, two thirty-year-old best friends in Los Angeles, are thrust unexpectedly into an international conspiracy when Audrey’s ex-boyfriend shows up at their apartment with a team of deadly assassins on his trail.

Oz the Great and Powerful

Oscar Diggs, a small-time circus illusionist and con-artist, is whisked from Kansas to the Land of Oz where the inhabitants assume he's the great wizard of prophecy, there to save Oz from the clutches of evil.

During a post-Christmas play date, the gang find themselves in uncharted territory when the coolest set of action figures ever turn out to be dangerously delusional. It's all up to Trixie, the triceratops, if the gang hopes to return to Bonnie's room in this Toy Story That Time Forgot.