Shōyō Hinata began playing volleyball after seeing the "small giants" who played the sport when he was in elementary school. He suffers a crushing defeat in his first and last tournament in middle school at the hands of his rival Tobio Kageyama. So, Hinata joins Kurasuno High School's volleyball team, vowing revenge against Kageyama. However, Kageyama is also on Kurasuno's team. The former rivals form a legendary combo with Hinata's mobility and Kageyama's precision ball-handling. Together, they take on the local tournaments and vow to meet K ... 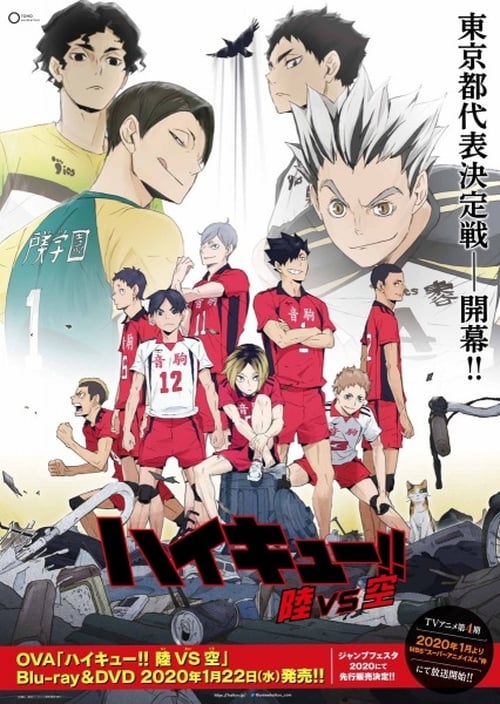 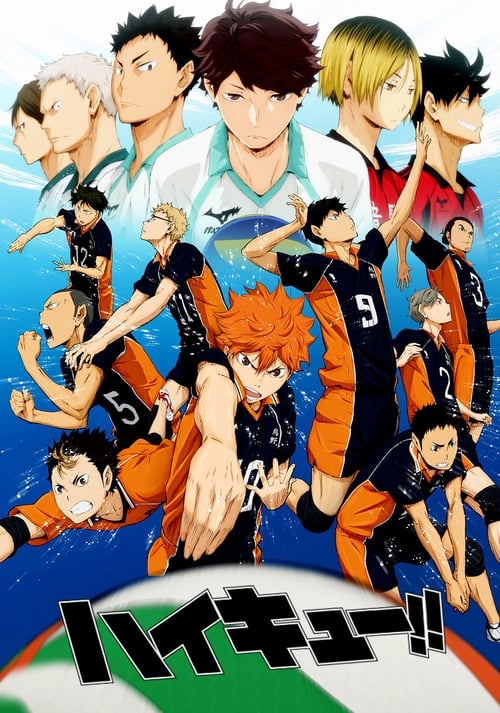 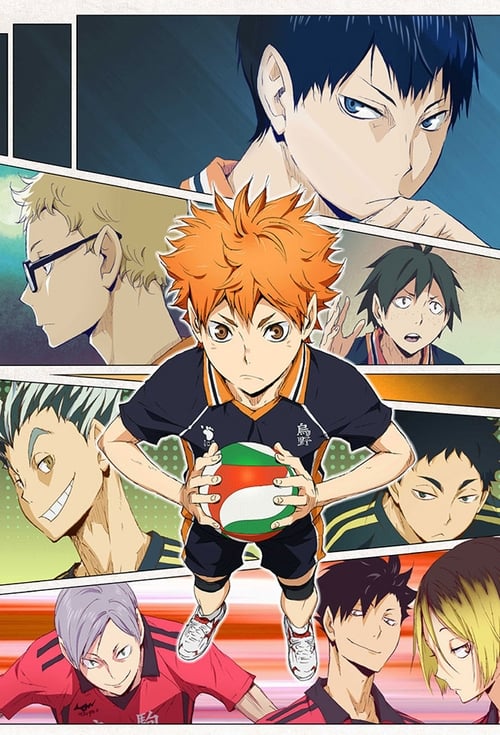 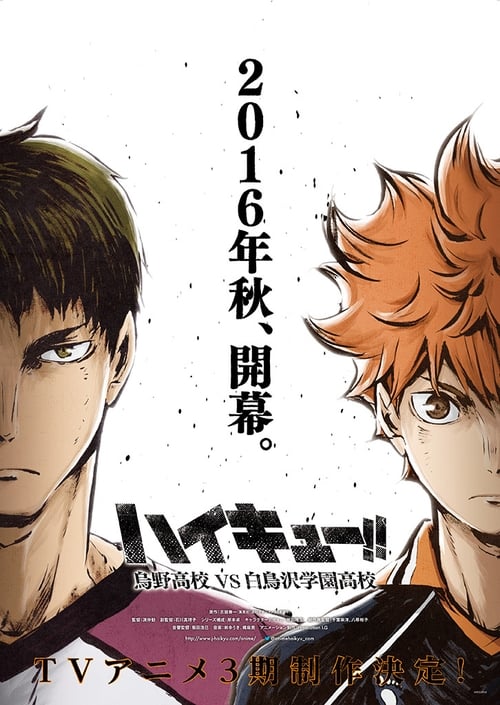 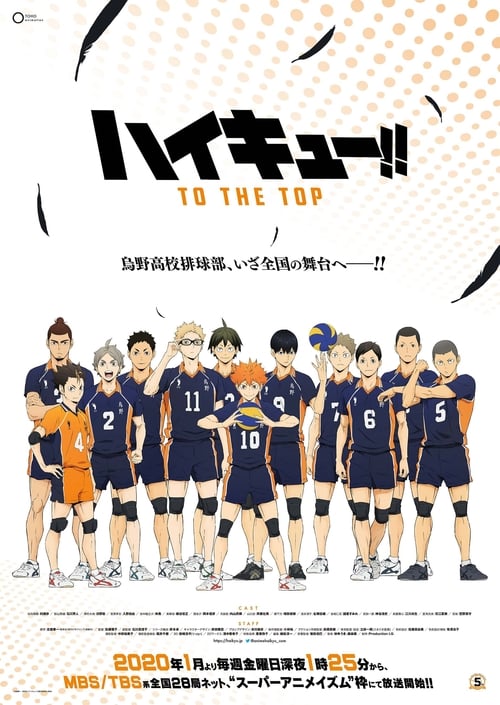 In a world where eighty percent of the population has some kind of super-powered Quirk, Izuku was unlucky enough to be born completely normal. But that won’t stop him from enrolling in a prestigious hero academy. Now, he’ll get his first taste of brutal rivalry from other schools as he braves the cutthroat, no-holds-barred provisional license exam.

Yukihira Souma's dream is to become a full-time chef in his father's restaurant and surpass his father's culinary skill. But just as Yukihira graduates from middle schools his father, Yukihira Jouichirou, closes down the restaurant to cook in Europe. Although downtrodden, Souma's fighting spirit is rekindled by a challenge from Jouichirou which is to survive in an elite culinary school where only 10% of the students graduate. Can Souma survive?

Rei is a 17-year old professional shōgi player, who lives by himself, not having a real family, and has scarcely any friends. Among his acquaintances is a family, which consists of a young woman, Akari, and two young girls, Hinata and Momo, and who also keep a numerous number of cats.

Sakamichi Onada is a wimpy high school freshman who loves anime. He initially wants to enter the anime club, but winds up joining the cycling club after meeting two classmates who are already famous cyclists. He undertakes the grueling training to compete in races, and discovers his own hidden talent in cycling.

Run with the Wind

Kakeru, a former elite runner at high school, is chased for stealing food. He is saved by a Kansei University student Haiji, who is also a runner. Haiji persuades Kakeru to live in the old apartment "Chikuseisou" where he plans to team up with fellow residents to enter Hakone Ekiden Marathon, one of the most prominent university races in Japan. Kakeru soon finds out that all of the residents except for Haiji and himself are complete novices.

Your Lie in April

Kousei Arima was a genius pianist until his mother's sudden death took away his ability to play. Each day was dull for Kousei. But, then he meets a violinist named Kaori Miyazono who has an eccentric playing style. Can the heartfelt sounds of the girl's violin lead the boy to play the piano again?

In another world, ninja are the ultimate power, and in the Village Hidden in the Leaves live the stealthiest ninja in the land. Twelve years earlier, the fearsome Nine-Tailed Fox terrorized the village and claimed many lives before it was subdued and its spirit sealed within the body of a baby boy. That boy, Naruto Uzumaki, has grown up to become a ninja-in-training who's more interested in pranks than in studying ninjutsu.. but Naruto is determined to become the greatest ninja ever!

Long ago in the mountains, a fighting master known as Gohan discovered a strange boy whom he named Goku. Gohan raised him and trained Goku in martial arts until he died. The young and very strong boy was on his own, but easily managed. Then one day, Goku met a teenage girl named Bulma, whose search for the mystical Dragon Balls brought her to Goku's home. Together, they set off to find all seven and to grant her wish.

6th-year grade-schooler Ayase Chihaya's dream is for her sister to be Japan's top model. However, transfer student Wataya Arata admonishes her that a dream must be about one's own self. Thus, she takes up karuta, a Japanese card game, competitively. Together with Arata and Mashima Taichi, Chihaya's childhood friend, they have great fun playing each other, but separate after graduation. 4 years later, Chihaya returns to town. Although Arata no longer plays the game, she believes that they will eventually reunite as long as she continues karuta. Together with Taichi, she establishes the Mizusawa High-school Karuta Club.

When Hotaru moves into a new apartment alone, there's a mysterious man standing nearby the apartment. Hotaru decides to confront the man, who turns out to live in the neighboring apartment. The next day at school, Hotaru's best friend Kanae tells Hotaru that a host tricked her out of her money. When Hotaru goes to confront the host, he happens to be none other than Hotaru's neighbor, Masamune?!

The story revolves around Haruka Nanase, a boy who has always loved to be immersed in water, and to swim in it. Before graduating from elementary school, he participated in a swimming tournament along with his fellow swimming club members, Makoto Tachibana, Nagisa Hazuki, and Rin Matsuoka. After achieving victory, each of the boys went their separate ways. Time passed, and in the middle of their uneventful high school lives Rin appears and challenges Haruka to a match, showing Haruka his overwhelming power. Not wanting it to end like this, Haruka, gathers together Makoto and Nagisa once again and brings a new member named Rei Ryugazaki to create the Iwatobi High School Swimming Club in order to defeat Rin.

The passionate story of an elementary school student whose thoughts and dreams revolve almost entirely around the love of soccer. 11-year-old Tsubasa Oozora started playing football at a very young age, and while it was mostly just a recreational sport for his friends, for him, it developed into something of an obsession. In order to pursue his dream to the best of his elementary school abilities, Tsubasa moves with his mother to Nankatsu city, which is well-known for its excellent elementary school soccer teams. But although he was easily the best in his old town, Nankatsu has a lot more competition, and he will need all of his skill and talent in order to stand out from this new crowd. He encounters not only rivals, but also new friends like the pretty girl Sanae Nakazawa and the talented goalkeeper, Genzo Wakabayashi, who shares the same passion as Tsubasa, and will prove to be a treasured friend in helping him push towards his dreams. Representing Japan in the FIFA World Cup is Tsubasa’s ultimate dream, but it will take a lot more than talent to reach it.

Light Yagami is an ace student with great prospects—and he’s bored out of his mind. But all that changes when he finds the Death Note, a notebook dropped by a rogue Shinigami death god. Any human whose name is written in the notebook dies, and Light has vowed to use the power of the Death Note to rid the world of evil. But will Light succeed in his noble goal, or will the Death Note turn him into the very thing he fights against?

Twelve-year-old Gon Freecss one day discovers that the father he had always been told was dead was alive and well. His Father, Ging, is a Hunter—a member of society's elite with a license to go anywhere or do almost anything. Gon, determined to follow in his father's footsteps, decides to take the Hunter Examination and eventually find his father to prove himself as a Hunter in his own right. But on the way, he learns that there is more to becoming a Hunter than previously thought, and the challenges that he must face are considered the toughest in the world.

Shigeo Kageyama, a.k.a. "Mob," is a boy who has trouble expressing himself, but who happens to be a powerful esper. Mob is determined to live a normal life and keeps his ESP suppressed, but when his emotions surge to a level of 100%, something terrible happens to him! As he's surrounded by false espers, evil spirits, and mysterious organizations, what will Mob think? What choices will he make?

A stout, weak, yet highly passionate Sora Kurumatani enters Kuzuryuu High School with hopes that he'll fulfill his mother's wishes to dominate his first high school tournament. However, the basketball club—turned den for delinquents—does anything but play basketball! Its club members, Momoharu Hanazono, a skilled blocker who can do power jumps but is horrible at shooting, and his twin brother Chiaki, a talented point guard, has also lost interest in the sport. With just one game overwhelmed with adrenaline rush and excitement, and Sora's pure love for the game, the youth's burning out spirit for basketball rekindles.

Since the graduation of the senior members of the club, Takezou ends up being the sole member of the "Koto" (traditional Japanese string instrument) club. Now that the new school year has begun, Takezou will have to seek out new members into the club, or the club will become terminated. Out of nowhere, a new member barges into the near-abandoned club room, demanding to join the club. How will Takezou be able to keep his club alive and deal with this rascal of a new member?

Shikada Kokonotsu's father owns a rural sweets shop, and his plan is for Kokonotsu to take it over one day. However, Kokonotsu wants to be a manga author instead! One day in summer, the cute but weird girl Shidare Hotaru, from the famous sweets company, comes to pay a visit. Apparently, Kokonotsu's father is famous and she wants him to join her family's company. However, he will only agree if she can convince Kokonotsu to take over the family business!

In the story, Kagami Taiga has just enrolled into Seirin High School when he meets Kuroko Tetsuya of the school's basketball team. Kuroko happens to be the shadowy sixth member of the legendary Generation of Miracles basketball team. Together, Kagami and Kuroko aim to take their team to the inter-high school championship - against Kuroko's former teammates.